Victory is in the eye of the beholder

How much is a gold medal worth at the 2020 Tokyo Olympics? Depends on who you ask. USA gymnast Simone Biles’ elation was contagious when she won bronze at the womens’ balance beam final, after a mental health crisis caused her to pull out of other events. Meanwhile in Greco-Roman wrestling, Kenichiro Fumita offered a tearful apology for “only” winning a silver medal, describing it as a “shameful result.” Both Biles and Fumita faced unusual pressures to succeed in the 2020 games.  So why was Biles so happy to achieve bronze, while silver was so disappointing for Fumita?

New York Times journalist Motoko Rich suggests their drastically different responses to similar pressures may be cultural. In a recent NYT article, she cites several more examples of Japanese 2020 Olympic athletes apologising for silver and bronze medals, observing that such apologies are actually “everyday social lubricants in Japanese culture.” She also quotes Shinobu Kitayama, a social psychologist at the University of Michigan, who suggests that the polar opposite attitudes of Biles and Fumita can be explained by cultural differences. “Americans are very good at finding reasons why you are great even if you fail,” says Kitayama – but in Japan, “even if you succeed, you have to apologize.”

Translations and Interpretations: a rickety bridge

With 206 countries competing in this years’ games, linguistic and cultural differences – like the contrasting attitudes of Biles and Fumita – are bound to create challenges in the stadium, Olympic village, and the city itself. 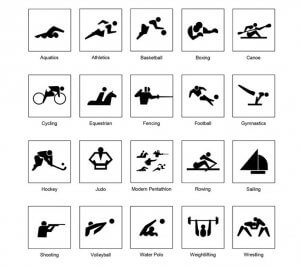 It’s not the first time Japan has had to tackle cultural and linguistic barriers to host an Olympics. At the last Tokyo Games in 1964, organisers were conscious that few guests would understand Japanese. To bridge the gap, designers Masasa Katzumie and Yoshiro Yamashita created a system of pictograms to communicate sports and general services to participants and spectators across diverse linguistic and cultural backgrounds. The minimalist, high-impact images were so effective that some pictograms from the 1964 Games are still used internationally today – for example, on the doors of mens’ and womens’ toilets.

As a non-verbal system equally accessible to speakers of all languages, Japan’s 1964 set of pictograms was arguably one of the world’s first global DEI initiatives.

This innovation stands out against the lacklustre backdrop of the two go-to solutions to language barriers traditionally adopted in international sports: translation and interpretation.

Interpreting is a minefield, not just at the Olympics but in sports generally. Fabio Capello, manager of the England football team from 2007-12, was criticized by both England players and journalists for relying on interpreters instead of learning English. In a study of language barriers in Italian football, researcher Raymond Siebetcheu highlights Capello’s clashes with England player Wayne Rooney, observing, “interpreters are not a clearcut solution to solving communication issues in the football context, where it is difficult to render emotions, states of mind and other psychological expressions during training sessions or matches.” Clearly, literal translations are not enough to create an inclusive environment and build trust in international sports.

Language and intercultural learning connect us to the world

Japan’s approach to the 2020 Tokyo Games suggests that the nation understands this, and is yet again ready to take intercultural communication to a new level. On 6 December 2018, executive members of the Tokyo 2020 Olympics team plus 100 staff members took a “Diversity & Inclusion pledge.” In a keynote speech entitled “Sport and Diversity in an Inclusive Era”, Kuniko Muramatsu, Representative Director of the non-profit organisation GEWEL, asserted that “sport has the immense potential to spread the idea of diversity across Japan” and “to change the world and the future”.

Despite the last-minute challenges presented by COVID-19, Japan as a nation seems to have embraced this potential. In the lead up to the 2020 Games, the Japanese have been busy finding new ways to engage with this summer’s diverse group of visitors. For example, in 2017 the University of Tokyo launched Olympic Friendships: Elementary Education for Global Competency in Japan and United States – a two year project designed to facilitate a cultural exchange between elementary schools in Japan and the US. As part of the initiative, 24 US American teachers came to Japan, lived with Japanese pupils and their families, and taught in Japanese elementary and middle school classrooms, “fostering a heightened cultural exchange” between US and Japanese schools.

At a 2016 panel discussion at the Young Museum of Fine Arts, Silicon Valley philanthropist James Higa pointed out that while Japan’s focus for the 1964 Games was rebuilding from the inside after the devastation of World War II, “2020 would be about connecting Japan to the outside… The 2020 Games would be an excellent opportunity for Japan to connect to the world by making it easier for foreigners to come to Japan and engage with Japanese.” As a tech guru who has worked with Steve Jobs, Higa then zeroes in on the role of language technology in helping foreigners connect with the Japanese. But his point applies more widely as an observation about Japan’s mindset around the current games.

With English being the national language in 88 countries as well as one of the official Olympic languages, many Japanese have decided to double down on their English language learning efforts ahead of the Games. Perhaps the most beloved crusader for communication is Setsuko Takamizawa, a Japanese great-grandmother determined to volunteer at the Games at the age of 92. Denied the opportunity to learn English throughout her youth because it was deemed “the enemy language” following World War II, the 2020 Olympics have rekindled her lifelong desire to “share stories with people from around the world”. Her efforts to learn English over the past two years, aided by her tech-savvy English-speaking granddaughter, quickly went viral.

Still, learning English in Japan comes with unique challenges – only 30% of Japanese people speak any English at all, and less than 8% of Japanese people and possibly as few as 2% speak English fluently. There are many opinions on why fluent English is so rare among the Japanese. Some linguists have highlighted that English is just harder to learn for native Japanese speakers due the languages being so structurally different.

Cities aspire to host Olympic events because there is the hope that the Games will leave the community stronger and raise its global profile. But even before the 2020 Olympics were on the table, there was already a strong case for increasing English skills in Japan. It has been argued that raising the general level of English in Japan would improve the economy by making it a more attractive place for foreigners to contribute to, as both visitors and immigrants. In that sense, the 2020 Games have played a key role in motivating Japan to tackle some of these linguistic challenges.

It will be interesting to see if the percentage of Japanese English speakers increases following the Games, along with cultural curiosity. “Our goal,” proclaims the Tokyo Olympics D&I leaflet, “is to see Japanese society embrace D&I as a legacy after the Games by having everyone apply the D&I awareness they gained through the Tokyo 2020 Games continuously in new fields.” The Olympic spirit is palpable in this message. Jim Nantz, a broadcaster for CBS Sports who covered 3 separate Olympics, wrote that the games have a way of “stripping one of political, religious, or cultural differences, cutting to the core of that basic human spirit.”

Setsuko Takamizawa, having outlived history and politics long enough to embrace a new chance to connect with others, certainly brings this ideal to life. Thanks to Olympic volunteers like her, as well as Tokyo 2020’s recognition of Diversity & Inclusion as the “the driver” for the success of the games, we can hope that the 2020 games will not only help Japan “connect to the world” through cultural and linguistic awareness and a “legacy” of Diversity & Inclusion, but also help Olympic athletes and fans connect with and learn from each other, raising the overall global standard for upholding the Olympic values of excellence, friendship and respect.

What is lost in translation?

Symbols, translations, and interpretations help convey meaning.  But by relying exclusively on these to bridge linguistic and cultural gaps, are we missing critical chances to benefit more deeply from the diversity Olympic gatherings?  Isn’t there more that athletes like Biles and Fumita, and their fans, could be learning from each other?

In an essay published in Olympianism, Olympic Education and Learning Legacies (2014), Gary Rhodes and Jessica Zlotnicki propose that cultural awareness education for athletes and coaches, delivered before and during the games, in both digital and trainer-led formats, would empower athletes to “gain cross-cultural awareness” and “challenge national stereotypes.”  Following the games, athletes could then leverage their influence as public figures and their social medial presence to spread the Olympic ideals of “excellence, friendship and respect” through cultural awareness. “The end product,” claim Rhodes and Zlotnicki, would support “a more internationally sensitive community of athletes and coaches, which could help the true spirit of the games to emerge.”

With its focus on DEI, the Tokyo Olympic Committee has taken a huge step in recognising the Olympics as a global opportunity to foster intercultural understanding among international athletes and fans. Maybe going forward, the Olympic torch will be lighting the way for new DEI and linguistic strategies.

The Future of Work | What does Employee Engagement and Retention Look Like?

7 Key Things to Consider When Choosing An External Training Partner

The Great Resignation – How to retain and attract today’s workforce

People-Powered EdTech: Learnlight, a Change Enabler for Your Teams and Beyond

Take your business on the first step to transformative learning today. We look forward to being part of your journey.